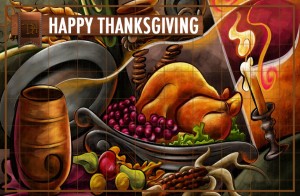 Tis the season to give thanks.  Whether it's the turkey dinner, football, or family gatherings that have you most excited about Thanksgiving this year, we wish you the very best this week!

To celebrate, here's a handful of fun Thanksgiving trivia to enjoy with family and friends this week...

Only male turkeys gobble.  They gobble to attract hens.  Wild turkeys are known to gobble a bit more frequently.  In 2012, there were 254,000,000 turkeys raised in the United States, but the President only pardons one each year.  91% of Americans eat Turkey on Thanksgiving.  The state that produces the most Turkeys is Minnesota.  Each turkey has around 3,000 feathers and if spooked, turkeys can run at speeds up to 20 mph.  Instead of the Eagle, Ben Franklin wanted the Turkey to be the national bird.

The first meal in space was a Turkey dinner.  91% of Americans serve Turkey at Thanksgiving, but only 50% stuffs it with stuffing.  Cranberries are served in around 94% of US homes during this holiday.  In fact, 20% of all cranberries consumed each year, are eaten at Thanksgiving.  To test if a cranberry is ripe, it should literally bounce higher than 4 inches.  We suggest this not be done on carpet!  In 2007, the US ate around 690,000,000 pounds of Turkey.  That's more weight than the entire population of Singapore.

Part of the reason why Swanson started creating TV dinners in 1953, was because they needed a way to get rid of the massive amount of leftover frozen Thanksgiving turkeys.  As you might expect, the first TV dinner from Swanson was a “Thanksgiving Meal”, made up of turkey, cornbread dressing, frozen peas and sweet potatoes.  Yum.

Black Friday is the day after Thanksgiving and is considered the start of the holiday shopping season.  The term "Black Friday" comes from when accounting records were kept by hand.  Red ink indicated a loss, while black ink represented profit, so "Black Friday" marked the day when stores moved from red to black.  To poke at the insanity so many retailers will experience on Black Friday, here are a few of our favorite memes. 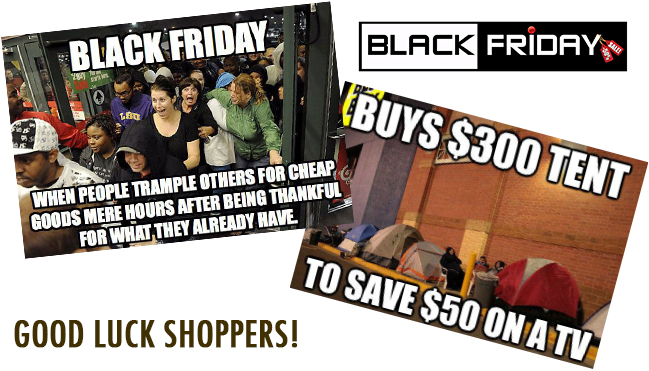